We all see that these two goalies are not performing well in the movement of stopping the low shot.

It is more obvious that they do not go far enough to reach the corner of the goal and that is common to both. We all see this fact through finishing the ball in the goal in case the goalie anticipates in which corner the ball will go.

Slightly more experienced coaches see that they both do not lower their hips enough to successfully stop low shots.

Even more experienced coaches see that one goalie tries to compensate for the lack of lateral stride, ie insufficient lowering of the hips, by bending the torso to reach with the palm of the hand the area where the low shot is expected to arrive.

Why these two goalies can’t lower their hips enough is explained here, and insufficient quality of the biomechanics of movement leads to various consequences.

They can range from lack of efficiency in matches (goalkeeper cannot defend shots in the bottom corner of the goal), through failure to realize personal potential (talented goalie performs on average level), to current or permanent health problems (from back pain to permanent structural changes in the hip or lumbar joints of the spine).

In order to help the goalie in time, it is necessary to constantly monitor him and when we notice shortcomings in performing the movement, help him.

BIOMECHANICS OF SAVING THE BACK PLAYERS’ SHOTS

END_OF_DOCUMENT_TOKEN_TO_BE_REPLACED

SAVING SHOTS FROM THE WING

”In the middle of difficulty lies opportunity.”- John Archibald Wheeler - https://youtu.be/pcXE1TdCHOA Shots from the wing are specific due to the smaller shooting angle which limits the attacker's possibilities and is most often defended by securing one part of the...

END_OF_DOCUMENT_TOKEN_TO_BE_REPLACED

COOPERATION WITH THE DEFENCE

“A man with one watch knows what time it is,a man with two is never sure.” - Mark Twain - Marko needs to learn different ways of collaborating with the block because in the senior category they will encounter different systems depending on the tactical requirements of...

END_OF_DOCUMENT_TOKEN_TO_BE_REPLACED

"The worst is the rush. Where there is haste there are no fruits or flowers. It is characterized by fear, man behaves like a machine, he is no longer responsible, he is no longer free, he does not recognize others." - Ernesto Sabato - The goal of the entire process is...

END_OF_DOCUMENT_TOKEN_TO_BE_REPLACED

The relationship between test results, ie skill levels, and goalkeeping performance should be two-way. The level of ability should be good for successfully performing goalkeeping movements. In order not to deteriorate the health of the goalkeeper, goalkeeping...

END_OF_DOCUMENT_TOKEN_TO_BE_REPLACED 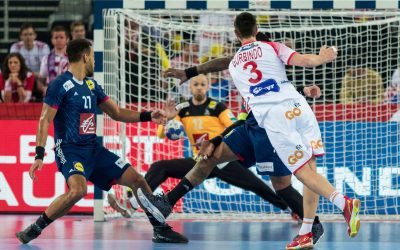 We measured more than 70 female and male goalkeepers from 10 years to senior age, from amateur level to national team players. We started doing this because we were interested in why some very talented and successful goalkeepers cannot perform specific goalkeeping...

END_OF_DOCUMENT_TOKEN_TO_BE_REPLACED

As cooperation with the block assumes that the defender at least tried to block the shot of the back player, the contents and situations similar to those in the game are used for the development of psychomotor speed, but with an emphasis on stimulating the...

END_OF_DOCUMENT_TOKEN_TO_BE_REPLACED

FEAR OF THE BALL

All good goalies have only one talent in common:  They are not afraid of the ball. Whether Marko has a fear of a ball can be easily seen by the movements of their hands in defense: If he defends their face first during each shot, and only then move their palms...

END_OF_DOCUMENT_TOKEN_TO_BE_REPLACED

We all see that these two goalkeepers do not lower their hips enough to effectively stop low shots. https://youtu.be/l2JxrmUrUJU That's easy.It is difficult to see why this is so. We tested the abilities of over 50 goalkeepers from 10 years to senior age, both male...

$en{This website uses cookies to improve your experience while you navigate through the website. Out of these, the cookies that are categorized as necessary are stored on your browser as they are essential for the working of basic functionalities of the website. We also use third-party cookies that help us analyze and understand how you use this website. These cookies will be stored in your browser only with your consent. You also have the option to opt-out of these cookies. But opting out of some of these cookies may affect your browsing experience.}$hr{Ova web stranica koristi kolačiće za poboljšanje vašeg iskustva tijekom navigacije kroz web stranicu. Od toga se kolačići koji su kategorizirani po potrebi pohranjuju u vaš preglednik jer su neophodni za rad osnovnih funkcija web mjesta. Također koristimo kolačiće trećih strana koji nam pomažu analizirati i razumjeti kako koristite ovu web stranicu. Ovi će se kolačići pohraniti u vaš preglednik samo uz vaš pristanak. Također imate mogućnost odjave od ovih kolačića. Ali isključivanje nekih od ovih kolačića može utjecati na vaše iskustvo pregledavanja.}
Necessary Always Enabled
Necessary cookies are absolutely essential for the website to function properly. These cookies ensure basic functionalities and security features of the website, anonymously.
Non-necessary
Analytical cookies are used to understand how visitors interact with the website. These cookies help provide information on metrics the number of visitors, bounce rate, traffic source, etc.
SAVE & ACCEPT
Powered by